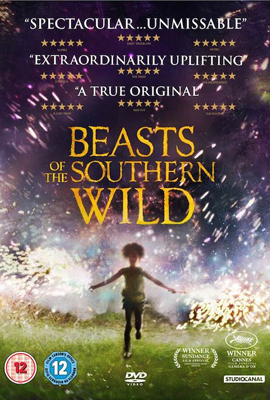 Beasts of the Southern Wild

In a forgotten but defiant bayou community cut off from the rest of the world by a sprawling levee, a six-year-old girl exists on the brink of orphanhood. Buoyed by her childish optimism and extraordinary imagination, she believes that the natural world is in balance with the universe until a fierce storm changes her reality. Desperate to repair the structure of her world in order to save her ailing father and sinking home, this tiny hero must learn to survive unstoppable catastrophes of epic proportions.

Six-year-old Hushpuppy is devoted to her father, Wink, who frequently goes off on sprees, leaving Hushpuppy to fend for herself in an isolated compound filled with semi-wild animals. The community is a resilient and joyous one, but there is a sense of inevitable destruction. At school, Hushpuppy is taught about natural selection, global warming and the ecological shifts that have placed them in a perilous position. Things come to a head when Wink comes down with a debilitating illness, a massive storm hits, and the ice caps melt, releasing destructive prehistoric beasts who descend on “The Bathtub”. Little Hushpuppy has to find in herself the courage and heroism to survive the catastrophe and re-instill a sense of community. Fusing recent history and contemporary environmental concerns with a mythic quality, Beasts of the Southern Wild defies easy classification or description, instead forging a new path that firmly establishes director Benh Zeitlin as a bright new cinematic talent.

In memory of child actress, Jonshel Alexander, who appeared in the Oscar-nominated 2012 film and who was tragically killed by gun violence in Louisiana at the age of 22.

Poignant Hushpuppy quotes from the film: “The whole universe depends on everything fitting together just right.”

“When it all goes quiet behind my eyes, I see everything that made me flying around in invisible pieces.”

“I see that I’m a little piece of a big universe, and that makes things right.”

Winner of the US Dramatic Grand Jury Prize in Sundance