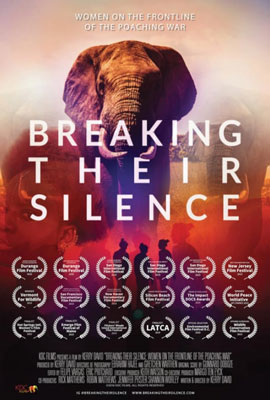 Breaking Their Silence: Women on the Frontline of the Poaching War

Filmmaker, Kerry David pursues a passion that takes her around the globe to meet some of the world’s most courageous women who are living and fighting on the frontline of the poaching war.

People Magazine called, Breaking Their Silence, “Outstanding, beautifully made, a powerful and heartbreaking film, a breathtaking documentary”, and Huffington Post wrote, “What’s striking about David’s film is its female subjects. A film that explores Africa and Asia’s intricate relationship in the war on wildlife through the female lens.”

From game rangers and veterinarians to prosecutors, forensic scientists, and undercover operatives, these inspirational women have only one goal – preventing further loss of our planet’s most endangered species.

“Breaking Their Silence” has won over 16 film festivals awards, been the topic of a TED X Talk, and featured on multiple global news outlets including the BBC, CNN and The Today Show on its journey to shine a bright and inspiring light on these women, their intelligence, empathy, strength and stamina. It has invoked deeply passionate responses from viewers around the world.

This powerful journey will challenge you and it will amaze you – leaving you inspired to become part of the solution!

If you would like to help prevent further extinction of wildlife in Africa, you can become a member or donate