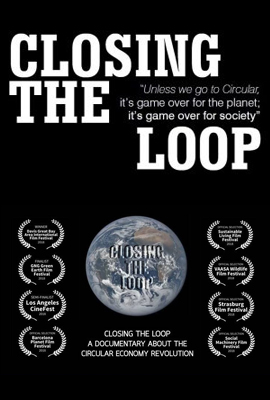 “Unless we go to Circular it’s game over for the planet. It’s game over for society.” Closing The Loop is the world’s first feature length documentary on the zero-waste / circular economy, supporting UN Sustainable Development Goal 12 on Responsible Production and Consumption. The film is presented by global sustainability expert Prof. Dr. Wayne Visser, in collaboration with Emmy and two time Telly Award winning director Graham Ehlers Sheldon. Closing the Loop  ranges across three continents and includes commentary from global experts and centres of excellence like the World Economic Forum and the University of Cambridge. A number of innovative circular economy cases are also featured in detail.

CEC envisions a new era where all cities worldwide function through a circular model, setting the end of an age of waste. The current economy is based on the linear model to produce and consume more products and discard them fast. Compounded with rapid population growth, resources depletion and growing pollution, it poses unforeseen threats to our future. CEC believes the transition to the circular economy is a solution to protect and promote the health of the people and the planet and to design out waste from our world.

In 2012, CEC was established by Anna Tari, who realized that there were a number of circular enthusiasts lacking a platform to play their part in implementing a circular economy. CEC was set up to bridge this gap by establishing a platform for the circular economy community, to come together and try our best to end with the age of waste at a local and global level simultaneously.

Watch similar films in the “Economy” category in our Streaming Collection