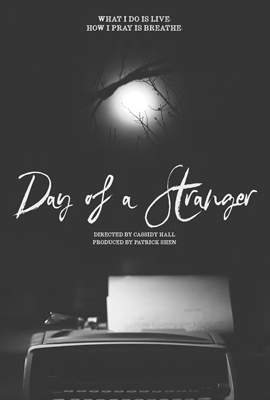 Day of a Stranger

DAY OF A STRANGER is an intimate portrait of a world-renown mystic and author during his final years living in solitude from 1965 until his shocking death in 1968. As a Trappist Monk, Thomas Merton became a prolific writer and was in dialogue with some of the twentieth century’s most influential figures, luminaries such as D.T. Suzuki, Rachel Carson, Henry Miller, Thich Nhat Hanh, Martin Luther King, Jr., and Dorothy Day. Interweaving meditative images of his hermitage nestled deep in the woods of Kentucky and rare audio recordings he made in isolation; the film pieces together a glimpse into the consciousness of one of the twentieth century’s most brilliant minds.

Included with your Vimeo on Demand purchase (click upper right icon in trailer) is HOW I PRAY IS BREATHE, a 60-minute meditative film captured at Merton’s hermitage during the summer of 2018 and winter of 2019, narrated entirely by the silence and the wind in the pine trees.

Watch more films on peace, compassion, and mindfulness in our Streaming Collection