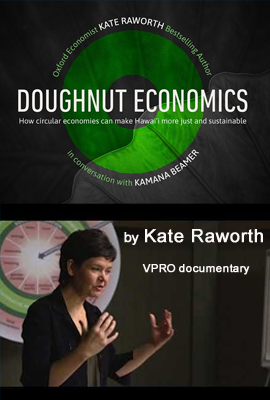 Doughnut Economics by Kate Raworth asks the question: Is our economic behavior at the service of growth and profit or does it serve man and planet? Economist and researcher at the ‘Environmental Change Institute’ in Oxford, Kate illustrates a regenerative approach to economics. Instead of rising lines and rising graphs, a different ideal image emerged: our economy should function according to the doughnut model.

How that works exactly, Raworth described in the book ‘Doughnut Economics’, which has achieved a true cult status among connoisseurs. Raworth’s plea for the ‘doughnut economics’ casts doubt on the credo of economic growth for sustainability.  There are hard limits to what you can do to the planet. From the start of your business you have to think and act circularly. Anyone who undertakes in this way, for example, remains under the ecological ceiling of a maximum of 1.5 degrees Celsius warming of the earth. At the same time, they can set the minimum wage for employees at a fairer social level.

Using video fragments, various round attributes and a special table, Kate Raworth shows how our economics can fundamentally be structured differently. With growth, but within the set limits. Or is reality more square?

Click her to Watch THE ECONOMICS OF HAPPINESS, additional films and access a listing of New Economy Resources

Visit the “Economy” category in our Streaming Collection for more great films!