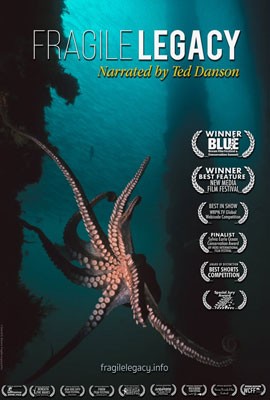 In 1885 Andrew Dixon White, first president of Cornell University, authorized purchase of over five hundred Blaschka glass models of marine invertebrates for use in teaching marine biology. These exquisitely crafted models enabled study of delicate creature that could not be otherwise documented or well-preserved. With the advent of the aqualung and underwater filming, the Cornell Blaschka collection fell into disuse. It was forgotten until the 1960s, when a young faculty member exhumed the collection from beneath layers of dust and rushed them to the Corning Glass Museum for preservation.

Fast-forward to the present day. The timeless sea is changing, and scientists around the globe are struggling to understand the impact of alterations in ocean chemistry and temperature on marine life as human activities take their toll. Among the leaders in the effort to come to grips with environmental change is Dr. Drew Harvell, a marine biologist in Cornell’s Department of Ecology and Evolutionary Biology. She is also the Curator of the Cornell collection of Blaschka glass, overseeing their restoration and display. But how many of the living creatures that were rendered in glass over a century ago still exist? In the midst of massive extinctions triggered by pollution, over fishing and habitat loss, how have these ancient organisms fared?

Join Dr. Harvell and marine filmmaker David O. Brown on a quest to film living examples of the inspirations for the Cornell Blaschka collection. The resulting footage will provide a high definition chronicle of marine invertebrate life in this millennium, providing perspective on which among these amazing organisms remain in the sea. The team will travel to coastal areas in tropical and temperate waters, as well as mounting deep-sea expeditions to document the wondrous biodiversity to be found hundreds of miles from land. As fragile as the Blaschka collection is, the animals it represents are little more than water, marvelously organized into glowing, translucent living things. As irreplaceable as the glass replicas are, the species upon which they are based are the product of millennia of evolution, carrying genetic information that, if lost, can never be retrieved. As different as today’s ocean is from that of a century ago, there is scientific consensus that the change has just begun. The sea is warming, and the very chemistry that enables many of these animals to exist is being fundamentally changed.

Fragile Legacy” combines art, science, history, conservation and adventure. The story follows a global quest to find living representatives of sea creatures that were captured in glass over 150 years ago. Narrated by Ted Danson, and featuring Dr. Drew Harvell of Cornell University, Fragile Legacy is filmed in Indonesia, Hawaii, Maine and Spain. The film celebrates nature’s diversity, human ingenuity and our potential to innovate our way to a sustainable future.

Produced by David O. Brown with support by the Atkinson Center for a Sustainable Future and the Corning Museum of Glass Foundation.