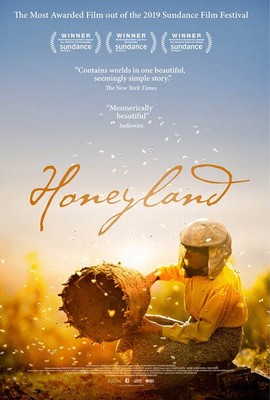 The last female bee-hunter in Europe must save the bees and return the natural balance in Honeyland, when a family of nomadic beekeepers invade her land and threaten her livelihood. This film is an exploration of an observational Indigenous visual narrative that deeply impacts our behavior towards natural resources and the human condition.

Honeyland was the most awarded movie at the 2019 Sundance Movie Festival, winning awards in three categories, including the Grand Jury Prize, the Special Jury Award for Impact for Change, and the Special Jury Award for Cinematography, all in the World Cinema Documentary Competition category. It also received two nominations at the 92nd Academy Awards in the categories for Best International Feature Film and Best Documentary Feature. Honeyland is the first documentary to receive a nomination in both categories in the history of the Oscars.

The Macedonian documentary film was directed by Tamara Kotevska and Ljubomir Stefanov.

For more, Click here to enjoy more great films in our Streaming Collection