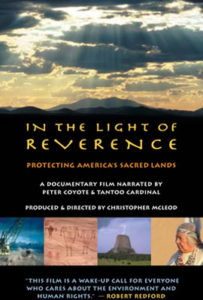 In the Light of Reverence

Ten years in the making, In the Light of Reverence explores American culture’s relationship to nature in three places considered sacred by native peoples: the Colorado Plateau in the Southwest, Mount Shasta in California, and Devils Tower in Wyoming. Rich in minerals and timber and beloved by recreational users, these “holy lands” exert a spiritual gravity which pulls Native Americans into conflicts with mining companies, New Age practitioners, and rock climbers. Ironically, all sides see themselves as besieged. Their battles tell a new story of culture clashes in an ancient landscape.

In the Light of Reverence juxtaposes reflections of Hopi, Wintu and Lakota elders on the spiritual meaning of place with views of non-Indians who have their own ideas about how best to use the land. The film captures the spiritual yearning and materialistic frenzy of our time.

In the Light of Reverence is narrated by Peter Coyote and Tantoo Cardinal. The film premiered in San Francisco on Saturday, February 17, 2001 at the Palace of Fine Arts. It received the Best Documentary Feature Award at the American Indian Film Festival in San Francisco. It was nationally broadcast on the PBS series P.O.V. on August 14, 2001 and was seen by three million people.

Produced and Directed by Christopher McLeod. Co-Produced by Malinda Maynor. Written by Jessica Abbe. Edited by Will Parrinello.