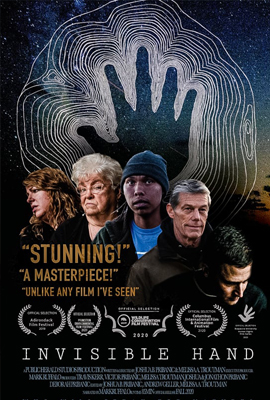 Produced by award-winning actor Mark Ruffalo, INVISIBLE HAND takes you behind the curtain of the global economy where ‘Rights of Nature’ becomes “capitalism’s one true opponent.”

In the fall of 2014, for the first time in United States history, an ecosystem filed to defend itself in a lawsuit claiming its ‘right to exist’ in Grant Township, Pennsylvania. For attempting such a radical act, Grant’s rural community of 700 people were sued by a corporation, then by the state government, and also locked in a battle to defend the watershed they call home through civil disobedience. The water they drink, the Rights to Nature laws they’ve passed are all on the line in this exclusive story.

Half a continent away in Standing Rock, North Dakota, the same industry threatening Grant Township is using militarized force against indigenous tribes and allies fighting to protect Mother Earth. The two, Grant Township and Standing Rock, are joined in an international fight to protect more than just water. They fight for their community, democracy, and for Nature as a living entity unto itself.

In the end, “Who will speak for Nature?”

From Executive Producer Mark Ruffalo comes a “Paradigm Shifting” story about the current global battle between capitalism and democracy where the fight for our survival is at stake. Click HERE to watch the Virtual World Premiere of INVISIBLE HAND that happened on September 4th, 2020.  Ruffalo joined a public discussion after the screening with the film’s award-winning directors, Joshua B. Pribanic and Melissa Troutman, and Rights of Nature experts who are featured in the doc. The group opened up a Q&A to talk about how this movement can actually create the systemic cultural change we need.

The film is available to all Public Herald Patrons for ($1) on Patreon.