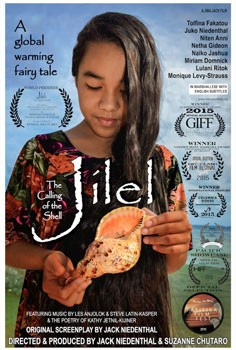 Jilel: The Calling of the Shell

Jilel (The Calling of the Shell) is the story of Molina, a young Marshallese girl who is confronted for the first time with the idea that her island—her beloved homeland—is vanishing because of the rising seas caused by world-wide global warming.

The most cherished person in Molina’s life is her grandmother, Bubu Titi. One day Bubu Titi tries to tell Molina that she is feeling weaker, that the time had come for her to pass. Though Molina refuses to believe this, a few days later she finds herself alone with her grandmother as the old woman draws her last breaths. It is then that Bubu Titi bequeaths to Molina an ancient family heirloom in the form of a shell. Bubu Titi’s last words implore the deeply saddened Molina to treasure the shell, to not be careless with it because of its immense power.