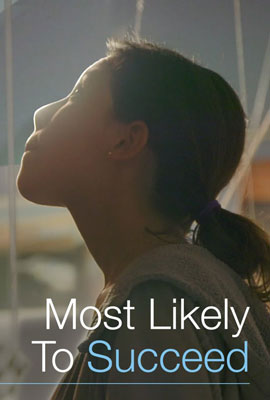 Most Likely To Succeed

The feature-length documentary “Most Likely To Succeed” examines the history of education in the United States, revealing the growing shortcomings of conventional education methods in today’s innovative world. The film explores compelling new approaches that aim to transform learning as we know it.  After seeing this film, the way you think about “school” will never be the same. Over a century ago, American education underwent a dramatic transformation as the iconic one-room schoolhouse evolved into an effective system that has produced an unmatched workforce tailored for the 20th Century.  As the world economy shifts and traditional white-collar jobs begin to disappear, it has the same system remains intact, producing potentially chronic levels of unemployment among graduates in the 21st Century.

The film follows students into the classrooms of High Tech High, an innovative new school in San Diego. There, over the course of a school year, two groups of ninth graders take on ambitious, project-based challenges that promote critical skills rather than rote memorization. “Most Likely To Succeed” points to a transformation in learning that may hold the key to success for millions of our youth and most importantly, our nation – as we grapple with the ramifications of rapid advances in technology, automation, and growing levels of income inequality.

Watch for FREE on Amazon Prime