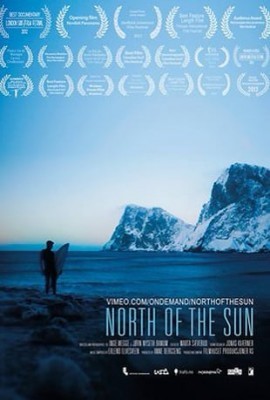 North of the Sun

Inge Wegge and Jørn Ranum spent nine months of a cold, Norwegian winter in the isolated and uninhabited bay of a remote, arctic island by the coast of Northern-Norway. There they built a cabin out of driftwood and other cast-off materials that washed up on shore, and ate expired food the stores would otherwise have thrown away. But the boys brought with them two items of utmost importance: their surfboards – perhaps their biggest motivation for the arctic adventure. Because the remote bay holds a well kept secret– some of the worlds finest surfing waves.

BANFF mountain film review:
“If it’s possible to have a perfect adventure film, then this year’s Grand Prize Winner comes about as close as you can get. A highly original adventure that’s captured in a film planned to perfection: a wonderful story, engaging personalities, breathtaking camera work, and expertly edited. It should be no surprise then that this was the unanimous choice of the jury. It’s a great privilege to present this years’ Grand Prize to two people who not only followed their dream but made a film so full of joy that we can all share in their adventure. If you ever thought the people of Norway are just a bit different from the rest of us… you must see this film.”
— Richard Else

Three brothers set out on a very special trip together. Motivated by the classic surfer’s relentless quest for the perfect wave, they travel to the remote Norwegian island of Bjørnøya. Lugging a surfboard, snowboard, paraglider and various other equipment they transform the challenging nature of Bjørnøya into their own playground. The brothers find their ice-cold waves and precipitous slopes, and we get the chance to join in on the excitement of shredding arctic snow and cruising the ice cold waves.