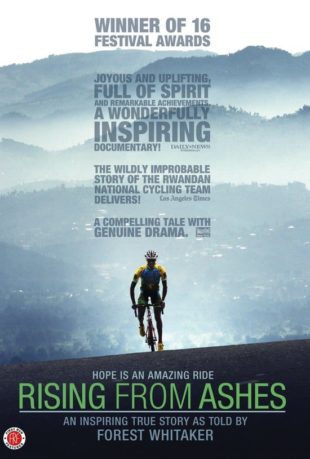 Two worlds collide when cycling legend Jonathan “Jock” Boyer moves to Rwanda to help the first Rwandan National Cycling Team in their six year journey to compete in the Olympic Games. Against impossible odds both Jock and the team find new purpose as they rise from the ashes of their past.

Stunningly filmed, Rising From Ashes follows Jock (the first American to compete in the Tour de France) and his Rwandan riders as they slowly learn what it means to be a professional cyclist – how to train, compete, and live the life of a top level athlete. As their strength and confidence grows, the riders of Team Rwanda give their fellow citizens a vision of something greater than themselves and their history: hope for a future.

“The wildly improbable story of the Rwandan National Cycling Team delivers! Experience the wonderful good spirits as the riders find their way in the strange new world of competitive cycling.” – Los Angeles Times

“A remarkable documentary….rich footage, a layered story, fantastic soundtrack – and uses each to vivid and captivating effect.” – LA Weekly

“A compelling take with genuine drama. Convincingly illustrates how biking restored a sense of national pride and a feeling of purpose.” – Time Out New York

“A masterful tribute to unity, selflessness and redemption in spite of all odds.”
– Truth on Cinema