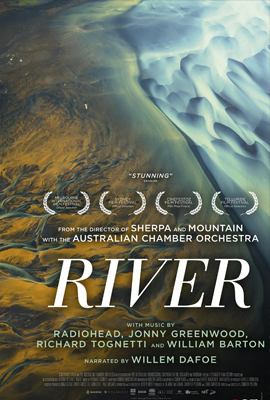 A cinematic and musical odyssey that explores the remarkable relationship between humans and rivers. Written by Robert Macfarlane with music by Richard Tognetti and the Australian Chamber Orchestra (ACO) and featuring music by Jonny Greenwood and Radiohead and narration by Willem Dafoe. A follow-up to the doc feature “Mountain” made by acclaimed Austrailian filmmaker Jennifer Peedom, who creates mesmerizing works of cinematic art that celebrate the majestic and incomparable beauty of this planet we live on.

Throughout history, rivers have shaped our landscapes and our journeys, and have played a distinct role in forming human civilization. RIVER takes its audience on a journey through space and time; spanning six continents, drawing on extraordinary contemporary cinematography, including satellite filming, the film shows rivers on scales and from perspectives never seen before. The combination of image, music and sparse, poetic script creates a film that is both dream-like and powerful, honouring the wildness of rivers but also recognises their vulnerability