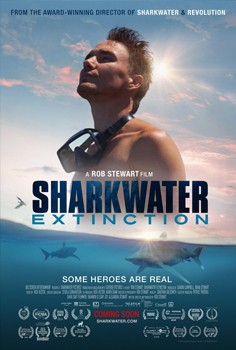 Late filmmaker, Rob Stewart’s first film, Sharkwater, brought the devastating issue of shark finning for shark fin soup to the world stage. Proving that sharks are misunderstood as dangerous creatures, biologist Rob Stewart travels to the Galapagos Islands, Costa Rica and other places where they can be found. Underwater, he shows sharks demonstrating their fundamentally nonviolent nature.

With 90 percent of the shark population destroyed by indiscriminate hunting, Stewart joined forces with conservationist Paul Watson to fight poachers who illegally kill these beautiful creatures for their fins and sell the meat to the Taiwanese Mafia. This multi-award-winning film changed laws and public policy worldwide. Because of  hundreds of newly created conservation groups, today more than 90 countries have banned shark finning or the trade of shark products.

Rob Stewart was an award-winning wildlife photographer, filmmaker, conservationist, and educator. Stewart studied biology and photography at schools in Jamaica, Kenya, Ontario, and New York. Stewart produced, directed, and starred in the multi-award-winning film, Sharkwater, Revolution, and Sharkwater Extinction. His photography and cinematography has appeared in media around the world including BBC Wildlife, Discovery Channel, ABC, Asian Diver, Entertainment Tonight, and various GEO magazines. Widely acclaimed as an environmental hero, he was the founder of the www.fin-free.org movement, as well as www.unitedconservationists.org.

For more, Click here to enjoy more great films in our Streaming Collection