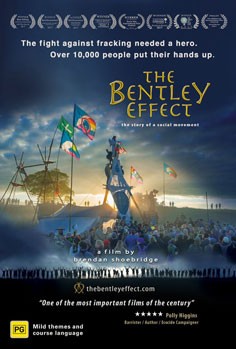 When the coal seam gas industry staked a claim on the Northern Rivers region of Australia, alarm bells rang out. Thousands of people from all walks of life organised themselves to rally against the unconventional gas invasion. But despite the enormous public opposition, the gas industry and the State Government were determined to see their gas plan through.

A series of dramatic blockades ensued before the final battle-lines were drawn in the peaceful farming valley of Bentley. A critical mass of people flocked to the site to stare down the threat of 850 riot police, ordered in to break up the protest. What happened next set an historic precedent.

Filmed over five years, The Bentley Effect documents the highs and lows of the battle to keep a unique part of Australia gas-field-free. This timely story of a community’s heroic stand shows that peaceful protest and non-violent direct action can not only overcome industrial might and political shortsightedness.

This highly acclaimed film chronicles and celebrates one of the fastest growing and most creative social movements we have ever witnessed, posing the question ‘what is truly valuable?