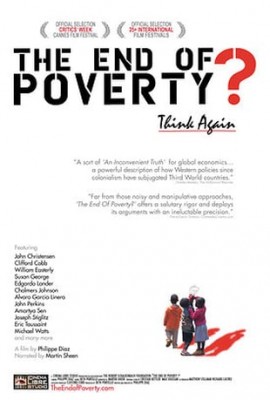 The End of Poverty?

The End of Poverty? is a daring, thought-provoking and very timely documentary by award-winning filmmaker, Philippe Diaz, revealing that poverty is not an accident. It began with military conquest, slavery and colonization that resulted in the seizure of land, minerals and forced labor. Today, global poverty has reached new levels because of unfair debt, trade and tax policies — in other words, wealthy countries exploiting the weaknesses of poor, developing countries.

The End of Poverty? asks why today 20% of the planet’s population uses 80% of its resources and consumes 30% more than the planet can regenerate?

The film has been selected to over 25 international film festivals. Directed by Philippe Diaz, produced by Cinema Libre Studio with the Robert Schalkenbach Foundation, 104mins, 2008, USA, documentary in English, Spanish, and French with English Subtitles. theendofpoverty.com