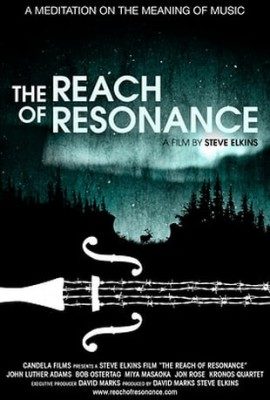 “The Reach Of Resonance” juxtaposes the creative paths of four musicians from different parts of the world using music for very unusual investigations. Among them are Miya Masaoka using music to interact with insects and plants; Jon Rose, utilizing a violin bow to turn fences into musical instruments in conflict zones ranging from the Australian outback to Palestine; John Luther Adams translating the geophysical phenomena of Alaska into music; and Bob Ostertag, who explores global socio-political issues through processes as diverse as transcribing a riot into a string quartet, and creating live cinema with garbage.

By contrasting the creative paths of these artists, and an unexpected connection between them by the world renowned Kronos Quartet, the film explores music not as a form of entertainment, career, or even self-expression, but as a tool to develop more deeply meaningful relationships with people and the complexities of the world they live in.

As a result of winning the award for Best Film Essay at Montreal’s International Festival of Films on Art, the film went on an international tour including screenings at the Louvre in Paris, the Tate Modern in London, the National Gallery in Washington, DC and the Museum of Fine Arts in Boston.

“This film will go straight into the canon of important works concerning art and its relationship to human existence.” ~ Post Planetary

“Have you ever heard Earth’s magnetic ﬁeld as melody or listened to a plant as part of a musical ensemble? What would an urban riot sound like if transcribed for string quartet? Can a piece of music be deﬁned by geographic rather than chronological length? Through its examination of the role of environment in the creation of music, and the deeper exploration of the environments created by these sounds, the ﬁlm achieves its goal of ﬁnding meaning in music beyond mere aesthetic pleasure.”
-Science Magazine