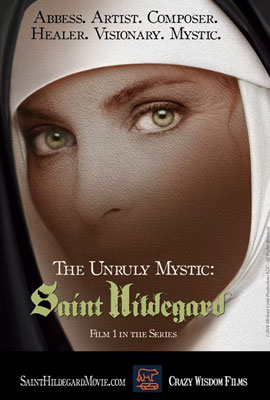 The Unruly Mystic probes why abbess, artist, composer, healer, and visionary Saint Hildegard von Bingen is considered to be the patron saint of creativity and discusses her continued impact today on theology, medicine, art, medicine and music. It explores how this 12th-century abbess became famous as a Christian mystic and visionary, as well as a musical composer and writer, whose natural medicine is still practiced in Europe today.

Discover why Saint Hildegard is the patron saint of creativity, and how her influence resonates today. The 12th-century abbess was a Christian mystic and visionary. She was also a musical composer, writer, and healer that created natural remedies widely used in Europe today.

Saint Hildegard is venerated worldwide by theologians, artists, musicians, medical practitioners, and educators. This film is a celebration of one woman’s legacy and a reminder that we should listen, seek calmness, and heed the calling of our souls.

Hildegard of Bingen (also known as Hildegarde von Bingen, l. 1098-1179 CE) was a Christian mystic, Benedictine abbess, and polymath proficient in philosophy, musical composition, herbology, medieval literature, cosmology, medicine, biology, theology, and natural history. She refused to be defined by the patriarchal hierarchy of the church and, although she abided by its strictures, pushed the established boundaries for women almost past their limits.

Along with her impressive body of work and ethereal musical compositions, Hildegard is best known for her spiritual concept of Viriditas – “greenness” – the cosmic life force infusing the natural world. For Hildegard, the Divine manifested itself and was apparent in nature. Nature itself was not the Divine but the natural world gave proof of, existed because of, and glorified God. She is also known for her writings on the concept of Sapientia – Divine Wisdom – specifically immanent Feminine Divine Wisdom which draws close to and nurtures the human soul.

From a young age, she experienced ecstatic visions of light and sound, which she interpreted as messages from God. These visions were authenticated by ecclesiastical authorities, who encouraged her to write her experiences down. She would become famous in her own lifetime for her visions, wisdom, writings, and musical compositions, and her counsel was sought by nobility throughout Europe.