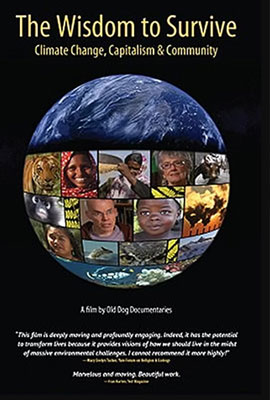 The Wisdom to Survive reveals how diverse environmental problems, from climate change to species extinction to ruined ecosystems, are all ultimately rooted in the “growth at all costs” attitude that pervades modern industrial society. Through beautiful and disturbing images and interviews with ecological scholars and activists, The Wisdom to Survive argues that our carefree consumerism will eventually cost a great deal indeed: the survival of humanity and most living beings on the planet.

Macksoud and Ankele challenge viewers to think critically about basic assumptions. The commentators in the film bluntly observe that the industrial system is “killing off the rest of creation” and committing a “crime against humanity.” They suggest that it is not just a few destructive practices (such as tar sands extraction) or especially shortsighted corporations (Monsanto, for example) that are to blame, but capitalism itself—an entire social system dedicated to financial profit and limitless growth regardless of consequences to the intricate natural systems that make life possible.

“This film is deeply moving and profoundly engaging. Indeed, it has the potential to transform lives because it provides visions of how we should live in the midst of massive environmental challenges. I cannot recommend it more highly!”—Mary Evelyn Tucker, Forum on Religion & Ecology at Yale

Download a discussion guide for Wisdom to Survive
olddogdocumentaries.org/product/the-wisdom-to-survive/