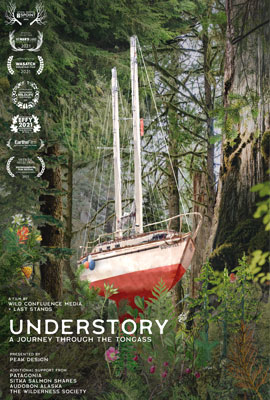 UNDERSTORY: A Journey Through the Tongass

Understory: A Journey Through the Tongass follows three women who set sail on a 350 mile expedition through Alaska’s massive Tongass National Forest, the largest remaining temperate rain-forest on the planet. With individual connections to the rain-forest, their goal is to explore how clear-cut logging in this coastal rain-forest could affect local communities and our planet’s climate while taking audiences on a journey through the beautiful, wild Tongass.

The story follows Elsa Sebastian, a young local fisherman who grew up in a remote village surrounded by the vast, ancient forest. When Elsa learns that the US government is axing environmental protections for 9-million acres of the Tongass, she is driven to action; first fixing up an old sailboat, and then setting sail on an expedition along the coastal rainforest.

Elsa is joined by Dr. Natalie Dawson, the executive director of Audubon Alaska and a biologist who has spent decades studying Alaska wildlife, and Mara Menahan, a botanical illustrator. For a month the team documents old-growth trees threatened by logging, visits streams teeming with salmon, bears witness to the dark aftermath of clear-cuts and learns about indigenous cultural connections to the Tongass. As Elsa, Natalie, and Mara directly face the devastating impacts of the timber industry, they struggle to hold onto hope and realize that saving our last ancient rainforests is more urgent than they could have imagined.

Old growth forests are a home to thousands of years of rich biodiversity. Through Understory’s gorgeous cinematography and animation, we become aware that saving ancient forests like the Tongass is critical to the resilience of humans and the future of our planet’s climate. We also learn why simply planting trees after clear-cutting is not a solution for deforestation.

Fisherman Spencer Severson and Tongass Community Organizer, Heather Bauscher, tell us all about the amazing connection between our forests and salmon.

“Lying in our “backyard” in Sitka, the Tongass National Forest is a globally significant coastal rainforest ecosystem that plays a vital role in sustaining the wild salmon of Southeast Alaska. The Tongass also lends a big hand in combating climate change, sequestering more than 40% of the carbon stored in all the national forests in the United States.

“Sitka Salmon Shares is proud to have supported the cause of Tongass protection for many years by helping to spread the word to our members, weighing in as a business, and donating to causes like the “Understory” film through our 1% to the Wild Fund.” ~ Kelly Harrell, Chief Fisheries Officer  SITKA, ALASKA

“Why would we want to take what we know is a stable, working environment that’s protecting us from climate uncertainty, level it, and, as part of that, take the gamble that we will never see a forest like this again. This is not a renewable resource. Not in the lifetime of multiple generations is this a renewable resource… As Americans, we’re choosing every day to trade our only rainforest for a myth of economic timber production that has never existed. We continue to choose to cut down these trees largely because most Americans don’t know that this place exists.” — Dr. Natalie Dawson – Executive Director, Audubon Alaska