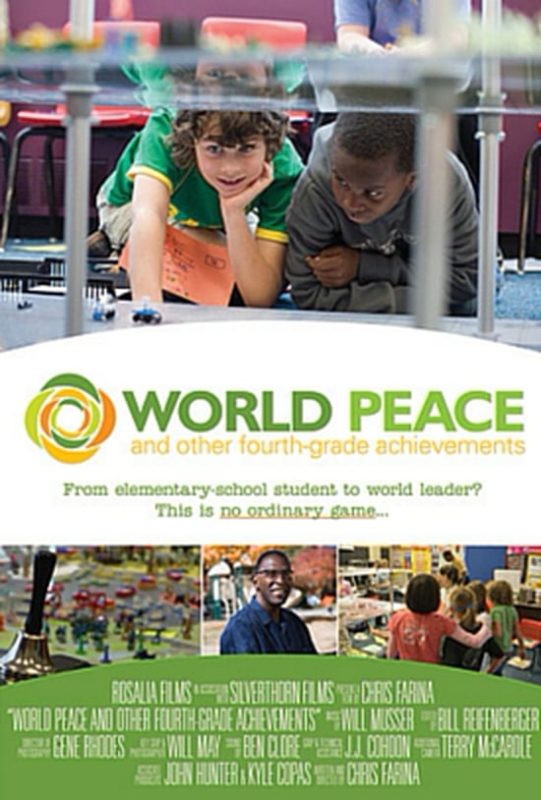 World Peace and Other Fourth-Grade Achievements

World Peace and Other 4th-Grade Achievements is a one-hour documentary on John Hunter, a fourth-grade teacher in Charlottesville, Virginia and his students as they participate in Hunter’s remarkable educational exercise the World Peace Game. The film has played in festivals around the world, has been broadcast in several countries and was aired to over 85% of the US on public television between 2012-2014. It also supports Hunter’s World Peace Game Foundation work, and has had special screenings at the Pentagon, the United Nations, the Aspen Institute’s Ideas Festivals,and several universities, educational conferences and schools throughout the world.

The World Peace Game is a hands-on political simulation that gives players the opportunity to explore the connectedness of the global community through the lens of the economic, social, and environmental crises and the imminent threat of war. The goal of the game is to extricate each country from dangerous circumstances and achieve global prosperity with the least amount of military intervention. As “nation teams,” students will gain greater understanding of the critical impact of information and how it is used.

Master Classes Are Open to Teachers of All Grade Levels. A Master Class is an unparalleled experience for teachers to come together in an environment insulated from the demanding rhythms and routines of the day in order to interrogate their own teaching practices. Using John Hunter’s World Peace Game as an inspiring and challenging analogy, class participants are led through a series of reflective questions and activities that uncover the grounding assumptions of their teaching practice.